Funche was made at my house over the weekend. It served as a quick lunch that was satisfying and filling—generally served with stewed sardines or with red beans. Sometimes, it was served with both, which I didn't like.

Basically, funche is a cornmeal porridge. Like other porridge, like oatmeal or cream of wheat, funche is water-based and cooked carefully by continuously turning or mixing the porridge over the fire.

What is the Difference between Funche or Polenta?

I hate to say this, but absolutely nothing. Both have the exact process of hot water, cornmeal, butter or oil, salt, and pepper to taste. American grits add milk and cheese, which elevates this dish into the Southern American staple it has become. The funche my mother used to prepare did not have any cheese, and the texture was dry, so it was served with a sauce-based protein like sardines or beans.

Why is it a Building Block?

The versatility of corn, its ease of propagation, and yielding numerous ears of corn make corn a product of multiple uses. Because of these reasons, corn can be considered relatively inexpensive. Corn can be eaten as ground or whole corn, toasted or boiled, and even baked. In times of scarcity in Puerto Rican history, cornmeal has been there to sustain the community, just as much as our beloved rice and beans.

Corn was brought to the island by the Taino Indians. They were originally Arawak Indians from South America. After intensive battles with the Carib Indians, they lived mostly in Cuba, La Española (Dominican Republic/Haiti), and Puerto Rico. The Tainos would make various dishes with corn, including a porridge-like dish resembling funche. The corn was ground either fresh or dried or toasted, and then water was added. This mixture was also baked into bread.

The Spaniards adopted these Taino dishes to help them survive while on expeditions. In addition, the availability of corn through the island, the Caribbean, and Central and South America made dishes with corn an easy source for sustenance.

Many of the foods we eat on the island now are adaptations of recipes eaten in West Africa. Corn made its way throughout the globe, including Africa. People in West Africa already had a dish they called Ngfungi. By the time enslaved people arrived at the island, many were already consuming corn, which meant that corn and funche quickly became a staple food provided for their sustenance.

Corn in times of scarcity

We have to remember, first and foremost, that Puerto Rico is an island. And even though it is a tropical island on which countless products could be cultivated, there is a significant dependency on imported products. Something that still holds to this day. Cornmeal has always been available, just as much as rice, to fill the gap for those in impoverished communities. Like rice, it is a grain that doubles when cooked, making it a great source to feed a family with a small amount. Cornmeal is flexible enough to make funche, or grits, as well as bread and even desserts. Quickly converted from a breakfast item to a very filling lunch or dinner component.

There are different types of cornmeal available at the stores, and it all depends on what texture you are looking for. The essential thicknesses of ground corn are coarse, fine-ground, and Masa.

The coarse ground is very granular, with pieces as big as regular coffee grounds. Fine ground could be as fine as espresso coffee, while Masa is similar to flour but with a toothy/grainy feel to the touch.

I have always used coarse ground to make funche or grits. Once the grains are well cooked, they swell and bloom, giving each bite texture. I like using the finer coarse meal to make polenta.

Can funche or grits be made with Masa? I will say, Masa could be used for funche, although I have not tried it myself. I believe it will create a very smooth product, but not what many have come to know as funche or grits.

Now, funche has no bells or whistles. This is the most basic preparation of cornmeal. For every cup of cornmeal, I use one and a half cups of water. Water could be substituted with broth for a tastier end product. The original funche, or at least the way my mom cooked it, did not have milk added to it. We only used milk when we prepared breakfast.

Decide how much funche you would like to make. I serve about a cup of cooked funche per person. Since the cornmeal expands and doubles in volume, I cook about one cup of coarse cornmeal to one and a half (up to two) cups of water. Measure the water and the cornmeal. You will also need a wooden spoon. Once you start, you cannot stop, so make sure nothing will need your attention for the next 15 to 20 minutes.

Bring the liquid to a roaring boil. Then, with the wooden spoon, begin turning the water while slowly pouring the cornmeal. Be it a steady stream of cornmeal or slow-small batches, make sure the spoon never stops moving, and no clumps are forming. Once all the cornmeal has been incorporated into the water, lower the heat to low or medium-low heat. Continue turning the cornmeal until the grains of corn begin to swell. The funche will also become lighter in color, and the texture will be softer and not crunchy. This process takes between 15 to 20 minutes.

Fat or no fat?

My mother used about a tablespoon of oil to keep the funche from becoming too dry. I am instead using about a tablespoon of butter. Grits were one meal from the American repertoire that I could connect with because it is like funche, adding cream, butter, and cheese. When I want to eat Puerto Rican funche, I omit the dairy, except for the butter. 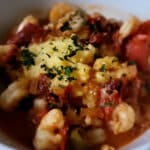