I love Italian food. Or at least what we know of Italian food. Since I am not of Italian descent, I cannot claim that what we know about Italian cuisine is authentic. For the most part, I adhere to the marinara sauce rule of thumb, but occasionally, I like to move away from tradition and enjoy the beauty of the ingredients without the long hour of stewing. Some of my favorite recipes are pasta with nothing more than roasted garlic, pepper, and freshly shaved Parmesan cheese. This recipe was no exception. Giving birth to the Tastiest Twist to Traditional Stuffed Pasta!

The issue was getting a stuffed shell as minimalist as possible. My concerns were I could not toss this pasta as I would with other pasta. Would I make a mess in the pan? Would the stuffing come out? I had added eggs to the Ricotta mixture, so how do I finish cooking the shells so that the eggs cook without covering the shells with sauce? Well, not to mention that I have never made stuffed shells before, so this was no easy task.

Part of me wanted to stick to tradition, and part of me wanted to try and experiment. Experimentation won. Why not? You cannot create the Tastiest Twist to Traditional Stuffed Pasta if we follow tradition! We know that if I follow the recipe at the back of the Barilla, I will end up with great-tasting shells, but if I experiment and come up with a great-tasting variation, we now have two great recipes to choose from!

Quick note, I am not yet affiliated with any brands. This means I get no monetary compensation for mentioning Barilla or whether any of my readers go to the Barilla website. I am mentioning Barilla because it is the brand I often use when I buy pasta, and I never have any issues with its quality. Although I never used the recipes on the side of the box, I decided to do so this time, at least to get me started. The recipe is easy to follow and got me thinking about the marinara sauce, but in the end, I decided to go my way on this one.

One thing I learned was reinforced while cooking another dish. I need a deep dish 9 x 13 pan. I have a 9 x 13 stoneware cookie/brownie pan, which is shallow, and it is not the right tool for this dish. Although the shallow pan I do have worked perfectly. It is nice to have the right tools for the job.

Although It came out with minimal sauce, the recipe is still not quite what I want it to be. I love the sweetness of the balsamic vinegar, contrasting with the acidity of the tomatoes. The creaminess of the Ricotta, mozzarella and Parmesan was superb. The egg helped the mixture adhere to the pasta, allowing each bite to have enough stuffing.

I also pulled the shells just under al dente, which helped since the pasta will bake for about 30 minutes in the oven. The pasta did get covered until the end, hence the golden crispy edges. With my most sincere honesty, I did not read the entire recipe card and missed that crucial part of the instructions. Still, I caught on to it and covered them for the second half of the cooking.

I hope you enjoy this recipe. Since I made it, my mind has been wrestling with the possibilities of making this better and more like what I wanted to experience. So, expect a new variation to this soon to come. Until then, Keep the flame burning! 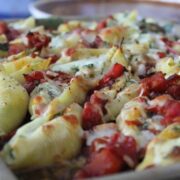 This recipe is an adaptation from the recipe on the box of the Barilla Jumbo Shells.    I did not want a super saucy dish, rather a clean, rustic take.