I get commissions for purchases made through links in this post.”

A tasty spice cake whose origins are in the western town of Añasco, Puerto Rico. As I take on this journey of Puerto Rican cooking, I find myself face to face with some never-seen-before recipes, which this is one of them.

Hojaldre in its simplest form is a spice cake. In the town of Añasco in Puerto Rico, hojaldre has been made famous. There is a bakery that concentrates on nothing more than this tasty cake and in variations of the same. The bakery has been in business since 1948, bringing to Puerto Rico an amazing cake that would go great with a hot cup of coffee. Today I bring you my retention to this Puerto Rican spice cake.

The cake itself is not super sweet, but the spices add depth and contrast to its flavor. I dusted mine with powdered sugar, which added sweetness to the recipe, but the cake is moist and flavorful even without powdered sugar. Almost instantly, I was craving a cup of coffee to go along with my slice of cake.

Want to try the real hojaldre from Puerto Rico? Click this link

What's in a name?

If you know Spanish, you will soon see that hojaldre is the Spanish name for Puff Pastry. I have inquired on this, and the name Hojaldre is in homage to another Spanish recipe. Now, I have researched and found that Spain has a spiced bar cake. This cake has spices in the mixture, along with raisins and nuts added to the batter. My recipe for my Puerto Rican spice cake does not call for that, but I could easily see how it would be a great addition.

Now, my focus has been to learn the recipe. So for today, I bring you the basic recipe. In the future, you will see variations to this tasty recipe.

When do we eat Hojaldre in Puerto Rico?

Almost every recipe was popular at a specific event or time of the year, and I do not believe Hojaldre is any different. As food and ingredients become more accessible, so do the recipes. If I were to make an uneducated guess, I believe the use of spices indicates the availability of the cake. You'll almost immediately think of the holidays due to the prevalent cinnamon and nutmeg profile when eating it. At the same time, because the flavor profile is of spices, I could easily assume that it makes it a good year-round recipe, not confined to a seasonal ingredient. Today, hojaldre can be purchased all year round at the bakery of its birth.

What you'll need to make this recipe

I ended using 3 bowls to make this recipe. One to mix the eggs and two to sift the flour and spices three times before adding it to the egg batter. A hand blender, of course, will come in handy unless you want to get in a nice arm workout and whip the eggs into the batter with a hand whip. The recipe called for a bundt cake pan. I do not own a bundt cake pan, so I used my springform cheesecake pan, and it worked just as great! Do what you can with what you have. However, part of me was about to run out the door to buy the bundt pan. Brownie pan or muffin pans also work well. I would say do not fill all the way to the edge. Allow room for batter expansion.

You will also need a sifter or mesh strainer to sift the flour and the confectioner's sugar. I did buy a handheld sifter a few months back, and I have used it more than I expected ever to use it and for this recipe is comes quite handy since we sift the flour three times before we use it. One last piece of equipment is the cooling rack. For many years I did not have a cooling rack, so I would take the rack from the toaster oven and prop it or invert it to have room for the item to cool. I guess you could do the same with an oven rack, but you will need considerably more space. The cooling rack I use now is collapsible and quite handy. I have two of them, and they can stack while in use. A feature I use during the cookie baking super bowl, The Holidays.

How to make Hojaldre

Start by preheating the oven to 350ºF. Set the oven rack in the middle. Grease and flour lightly a round 9x3 ½-inch Bundt pan. I did not have the bundt pan so I used my springform pan. Other options are muffin pans, brownie pans, or a loaf pan.

In a bowl, cream butter and sugar until light and fluffy.

Add eggs, one at a time, beating well after each addition.

Sift together the flour, baking powder, cinnamon, nutmeg, cloves, and salt three times (3x), and add to the cream mixture, alternately with milk and sweet wine. For the sweet wine, I used a Moscato with no special flavor. To learn more on the use of alcohol in cake baking, please follow this link!

Turn batter into pan and bake in a preheated oven for 1 hour, or until a toothpick, inserted in the center, comes out clean. I did bake my cake for the full hour, which in turn gave me very dark edges. The cake was considerably wet still at 40 minutes, so I would suggest shooting for 50 minutes. I baked my cake in a convection oven, which changes a bit of the baking times.

Although I have heard of this cake before, I have never had it. I have had the hard cookies that had a very similar flavor profile, which this cake took me back to. Fortunately, I have always enjoyed spice cakes and this one came out as a great surprise. I will definitely recreate it. 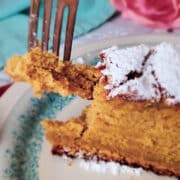