Like turkey to a Thanksgiving table, a pig roast is a Puerto Rican Christmas dinner. We love it! I am not sure who came first with this tradition, although many of the cultures colonized by the Spaniards do share a similar custom, and honestly, I think it is safe to say that we don't care who started it. We are just delighted that it is our tradition.

What Is The Traditional Pork Roast?

As a kid, I remember watching television commercials and holiday specials (specials based in Puerto Rico), which would at some capacity have a pork roasting in open fire while spinning in a pit. I remember people asking for their favorite parts, like the crispy ear or tail. We do not joke around when it comes to pork.

The pork cooked in the open flames is tender, moist, and has crispy skin. Pretty much self-basting in its fat as it turns. Cooking a whole pig can feed a party of up to hundreds of people depending on the size of a mature pig. If it is a suckling, anywhere between 20 to 30 people.

Besides the open flames; Adobo is the crucial ingredient In this dish.

Adobo is used all over. I mean; inside the cavity, under the skin, and over the skin. Knowing us Puerto Ricans, we would probably use powder adobo and garlic paste. The powder adobo is potent in flavor and adds flavor, while the garlic paste gives a subtler flavor, but the garlic remains more into the product, allowing for a taste of garlic in your bite.

Achiote powder and Paprika. These two spices are our color enhancers. Achiote oil adds plenty of color and flavor to any dish, while Paprika adds smokiness and a bit of heat.

What If You Do Not Have The Space To Make A Whole Pig?

But Zoe, I do not have the space to make a whole pig. What are my alternatives? Depending on the number of people you are serving, you can buy large roasting cuts. For example, my family is made of 8 to 10 people at most, so even the suckling pig might be too much meat, so I buy a Picnic Roast of 8 to 10 pounds. Be aware that these roasts have a bone in them which means there might not be as much meat available, but still enough to have a great gathering.

As much as it is my dream to one day cook a pig in the blazes (a la Brasa-Brasa meaning the flames of the fire), I still get my kicks out by cooking it in the oven. Now I have cooked pork in this method before here in the blog. My recipe for Cochinita Pibil is definitely a way of cooking a Puerto Rican roast in the oven which has a great amount of flavor and tenderness. Adding the plantain leaves also helps to add another level of flavor typical of Puerto Rico. But today, I want to bring you yet another method.

I want to declare that I am not a big "gadget" cook. I use my knife for everything, and I cook either on the stove, oven, or grill. So using a gadget like an Instapot is not my natural inclination. But, I used an Instapot as a way to reheat and share my pork roast at a work pot-luck, and immediately everyone asked how did you make your roast in the Instapot? I was honest and said, I didn't but since there is curiosity I will try, and here it is. You can make a delicious Puerto Rican Pork Roast in an Instapot.

Quick Notes On Making This Recipe

Like I said previously, I am not an Instapot user, so bear with me. If you try this recipe and find another way of making it, please share it with me. I would love to try your version!

Keys To Marinating And Food Safety

To begin, treat your pork roast the same way as if you were going to make it in the oven. The night before cooking, or at least 30 minutes before. I know it seems like quite a wide window, so let me explain. If you are planning on making this dish for a certain date, then consider marinating the meat for at least eight hours. Marinating the meat for a considerable amount of time helps to distribute the flavor throughout the meat. If you do not have the time or space to marinate the meat that long, a quick way to infuse the meat with flavor is by seasoning the meat and letting it rest for at least 30 minutes to an hour at room temperature. NO MORE THAN THAT, otherwise you are inviting a whole lot of food safety troubles. The safest way is to marinate it for at least 8 hours, covered and under refrigeration.

Begin by scoring the fat cap into a diamond shape. We want to score the cap, not cut through the meat. These cuts help in the releasing or rendering of the fat during the cooking process, which will baste the meat while cooking. Then, using a pairing knife, stab the meat creating deep pockets. Also, gently run the knife between the fat and the muscle to separate the skin.

Wash your hands. Generously sprinkle the meat with salt, pepper, cumin, coriander, paprika. Optional: powdered adobo (adobo powder blends do have all of the above ingredients, but adding the above ingredients on their own allows for their flavor to come through your food much more). Make sure to rub the seasonings all over the roast including inside the pockets cut with the paring knife and under the skin.

Wash hands again. Grab a handful of garlic cloves. Stuff each clove inside each paring knife pocket. If the pocket is deep enough put two cloves inside. Optional to use a garlic paste or adobo mixed with finely chopped culantro to stuff the pocket. Check out this fresh ADOBO recipe.

Making your Puerto Rican Pork Roast in an Instapot

The beauty of an Instapot is the delay start. You can set it to start cooking at a later hour. So in a way, the delay start is a great option for the quick marinade because you marinade it in the Instapot pan, set the machine to start about an hour later and it is good to go, plus the juices of the marinade are not lost in the process.

I placed the pork in the Instapot with a delayed start of about one and a half hours. Also, I set the machine for slow cooking for six hours with the vent open. I treated it as if I were not going to be at the house while the roast is cooking, even though I was at home. The reason is that many times I will set my oven to roast before I go to work and leave it cooking while I am out. Essentially the Instapot would do the same thing. The one caveat I have is, I felt like if I have turned it halfway through the cooking it would have rendered a better product. Something I didn't experience when I made cochinita pibil in the oven.

Don't have an Instapot? I've got you covered.

The only reason I made this recipe in an Instapot is that a few of my friends asked for it for the Instapot version. Like I said before, I do not own an Instapot, I use my oven for recipes like this one. The only difference is to set your oven to 250℉. You will still cook the pork roast for at least 6 hours, although when I made my cochinita it cooked for 8 hours. The pork comes out super tender and moist. With the six hours, you will get the tenderness, but not as much shredding, which is still a really good product.

Here are a few recipes that pair well with this magnificent dish: 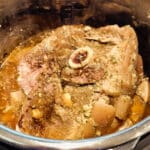 Like turkey to a Thanksgiving table, a pig roast is a Puerto Rican Christmas dinner. We love it! I am not sure who came first with this tradition, although many of the cultures colonized by the Spaniards do share a similar custom, and honestly, I think it is safe to say that we don't care who started it. We are just delighted that it is our tradition.
Author: Zoe Morman

I treated it as if no one was going to be at the house while the roast is cooking. The reason is that many times I will set my oven to roast before I go to work and leave it cooking while I am out. Essentially the Instapot would do the same thing.