This mushroom soup was so delicious, and it hit the right spot! Smoky, nutty flavors from the mushrooms combines with the creaminess of Manchego cheese and the sweetness of Marsala wine, rounded up this soup into a cup of earthy heaven!

Wow, I got inspired! Do you want to know why? Because I was so excited about the mushrooms, I forgot the cream I needed to make this soup cream of mushroom soup; hence the title is just mushroom soup. But, the soup worked just fine without the heavy cream, and it was completely and totally delicious. I also wanted a piece of ciabatta toasted with blue cheese, and that didn't happen either, so I went with ciabatta and manchego. If you have not tried Manchego cheese, try it; you will love it.

I have been in a mushroom kick for the last month or so. I think it is the season. Autumn/Fall inspires harvest, warmth, and coziness, and for some reason, mushrooms do the same for me. A while back, my husband and I were shopping at Whole Foods. I will be honest, I do not shop at Whole Foods as much as I would like to, but for now it is a treat and the place I go to find something different. And that day was no exception. We found one pound container with exotic mushrooms. This pack had a combination of Trumpet Royales, Alba Clamshells, Brown Clamshells, Maitake Frondosa, Enoki, and Shitake.

Honestly, I do not remember what we made with them the first time we came across them, but I was blown away by the mushrooms themselves. These mushrooms are grown very clean. Not one speck of dirt on them. They were very fresh and the taste was clean and fragrant. So, even though whatever I made was not memorable, working with the mushroom was, and I wanted to work with them again. So, I made my way back to Whole Food and found the mushrooms to make this delicious soup.

When you don't have cream for your soup, make a broth

So, my original plan was to make a cream of mushroom soup. I started the soup with that intend until I was about two steps away from adding the cream. I realized, that in my hyper focus of finding the mushrooms, I forgot to buy the cream, so now what? All I had was milk, hmm. I toyed with the idea of just making it a broth and adding beans and small diced onions and other vegetables to make it more like a broth. Only problem, I had added flour to the mushrooms to make a quick roux that would thicken my cream of mushroom. I still have milk . . .

I decided to go halfway if that were possible. To make a broth like not quite creamy mushroom soup. Considering the hurdles, this soup came out perfect!

"perchance to cream-ay, there's the rub"

Soups are either a broth or a cream. There are bisques and chowders, but I personally classify those as cream based or broths. For example, Manhattan Clam Chowder is a broth based chowder, whereas New England Clam Chowder is a cream.

Making a broth-based soup requires a liquid, be it water or a broth/stock, and flavorful aromatic vegetables and ingredients. All ingredients will be mostly visible when the soup is finished. Some potato based soups would turn murky due to the potato falling apart, but for the most part, all ingredients are easily identifiable, unless it gets blended as we would a tomato soup. Making a cream-based soup could require a roux to help with thickening of the soup and overall binding of the fats. These soups tend to be heavier, sometimes pureed and strained like a bisque.

As for my mushroom soup, after I had sweated the mushrooms and added the shallots, I added flour. Again, until this point I thought I was going to make a cream soup. Like I had mentioned before, flour works as a binder and as a thickener, aka a roux. When we add flour to any recipe and use it as a Roux, the roux needs to be cooked, even if just slightly, to remove the flour taste and transform it to a nutty accent flavor. I will write a post on using roux soon, so stay tuned. The next logical steps would be to add a stock and follow with a cream. I added the vegetable broth and continued cooking the soup up to the point to add the cream.

The not so creamy mushroom soup

At this moment I decided to use milk, but not that much, just enough to give my soup a milky color. By no means would milk give my soup the creamy consistency, but I could still get the look I was looking for. I compensated my lack of cream with manchego cheese. You see, sometimes I look at ingredients at their most basic element. If I have had sour cream or a creme fraîche, this recipe would have been a cream of mushroom, but I did not. Manchego, although a hard cheese, it is softer than Parmesan cheese. It has also a nutty flavor and it is not stringy.

The soup ended with a quasi creamy texture, but full of flavor. I had deglazed the pot with marsala wine right after the roux was cooked, and I seasoned the mushrooms with herb de provençe. The soup ended with a nice floral bouquet, delicate sweetness, and nutty earthiness. I had bought a nice ciabatta loaf, which I brushed with olive oil and fresh garlic and topped with more Manchego. I toasted the bread and used it as a tasty accompaniment to this delicious soup.

This soup was super easy to make, the longest part of the soup was cooking the mushrooms. I hope you enjoy making this as much as I have. Please let me know how it turns out when you make it. 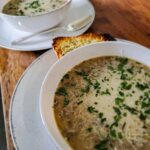