Budin de pan is a dense confection of bread, milk, eggs, and spices. A must for the holidays and excellent any time of the year.

Why you would love this recipe

This is one of those ”I feel at home” recipes. I remember as a child how much I enjoyed eating bread pudding. A love that has continued all my life. I dedicate this recipe to my mom. Who loved this version of preparation?

2. b ...and crumble the bread into pieces

7. a. Place pudding batter in buttered baking dishes. Add caramel at the bottom of the pan, then pour the batter. If using caramel, create a Bain-Marie by placing the baking dish inside a larger pan and adding enough water to reach halfway up the side of the baking dish.

What kind of bread do you use for bread pudding?

Does the bread has to be stale to make bread pudding?

In a way, yes. The idea stems from this being a recipe ideal for the use of old bread, hence keeping you from wasting any product. Also, stale bread tends to be dryer and harder because it has no moisture, which means that it will absorb all the liquid that is added to it. You can "stale" bread by heating the oven to 150-200℉. Cut the loaf in half cross and lenght wise. Place the pieces of bread on a cookie sheet and let it rest in the oven for about 20~30 minutes. Stale bread is a lot easier to remove the crust as well. The bread will practically crumble in your hands.

I have eaten bread pudding cold and warm, but warm is the best way to serve it. The warmth brings out a lot of the delicate flavors within the pudding. In the case of this pudding, when served warm, the silky texture will melt in your mouth and the anisette bursts from the raisins.

In Spanish, I hear budin and pudin. Are Budin and Pudin the same thing?

Yes. Both words mean the same. They are different dialects of the same word. Different countries use them either interchangeably or one or the other. Budins/pudins can be as savory as a sausage (the word budin takes root in Latin to botellus, which means sausage) and as sweet as a mousse. So the next time you eat sausage for breakfast, remember you are eating pudding.

I want to know what you think! Did you make this recipe? Please, leave a review and a rating below. You can also find me on Instagram! Did you know you could bookmark this recipe on your browser or save it to Pinterest for later?! 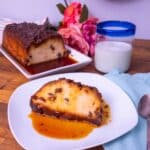