Rice and Beans go together like, ham and cheese. And today we learn to make Puerto Rican Red Beans!!! We eat a variety of different legumes or pulses; Black beans, White beans, Black-eyed Peas, Garbanzos, Lentils, Pintos, Pigeon Peas, and Pink beans. But today, we will talk about our most favorite bean, the Red Bean.

The number one bean, but why is that?

So why do we love beans in Puerto Rico? Easy; ease of growth, beans were cultivated long before colonization, and it is the common denominator of all three major races in the island, Taino, African, and Spaniard. The Taino natives used to cultivate beans and eat them fresh from the pods. African slaves brought with them beans they could cultivate like the Black-eyed Pea, and the Spaniards imported Garbanzos and Lentils to fulfill Mediterranean recipes.

Black Beans, I have actually written a post on black beans a little while back. I like black beans just as much as I like red beans, sometimes even more.

Garbanzos. This is another of my favorite legumes. I will write a post dedicated to them, but what I will tell you now is that there are many varieties of garbanzos. They vary in sizes and colors, and in texture.

Lentils. Like garbanzos, lentils also vary in color. These little peas are super tasty, granular in texture, and quite filling.

All the other colors. So beans color wheel ranges from black to white with the reds and pinks in between. But the color of the beans is not necessarily reflective of their nutritional value.

Sofrito and the connection to our beloved beans

So I also have a whole post on sofrito but I am still going to cover some important facts I have learned since.

In my post, I encourage the use of premade (homemade) sofrito. But if time permits, the tastiest way to make beans is by making sofrito in the pot as you go through the cooking process.

Pork. Pork is king when it comes to rendering a flavor profile that sends your tastebuds back home. At least, it does to me probably because I love pork so much. Traditionally we use fatback and ham when we make sofrito. Other options would be smoked ham, pork shanks, or pig's feet. But my most favorite form of pork is BACON. I have found packages of bacon pieces, thick random bits of bacon that are meaty and render great flavor.

This recipe works great for both canned and dried beans. For directions on how to rehydrate beans click here.

Once the fat is hot but not smoking, add the onions and cubanelle peppers.  Cook by stirring them occasionally until tender and translucent.

Add the garlic, and continue to cook until the garlic is soft and has a light golden color.

Reduce the heat to low and allow to cook covered at a low simmer for about 10 minutes or until beans are tender.

Stir the beans and check for the thickness of the sauce and tenderness of the beans.  Add more broth if necessary.

Season with paprika, oregano, cumin, salt, and paper to taste.  Cover and cook for another 10 to 15 minutes.  Serve beans over rice.

Here are a few notes and tips

Can these beans be made ahead?

Separating the beans into what stewing what you are going to eat and not stewing the rest, allows you to use the rest of the beans in a different application like Arroz con Habichuelas, add them to a soup, use them for refried beans, or add them to a salad, chili without having to deal with any extra flavorings and seasonings.

When I made this recipe, I had forgotten to pre-soak. Pre-soaking takes away a couple of hours of cooking. Without pre-soaking I took the beans, removed the broken and undesirable beans. Rinsed the beans and added them to my largest pot. Then I covered the beans with 4 quarts of water and began to boil. The beans had to cook for about 3 hours to get them to soften.

If I had soaked the beans overnight, the beans would have double size while I slept. Pre-soaked beans take about an hour to soften. From which at this point they can be easily stewed.

For the sheer amount of beans, I decided to cook, I would have probably needed the bigger pot to soak the beans. But by all means, do not use the entire bag if you do not want to. I do, only because I will freeze them once cooked and use them at a later time. I also, do not feel like going through all this process so many times in a week or even once a week, so I do it all at once. 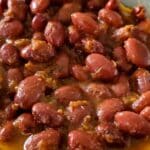 Comments, questions, or concerns? Leave them below! Cancelar la respuesta