Aji-li-mojili is usually served with Roast pork as a dipping sauce.  This sauce is also served with Tostones, viandas, or boiled root vegetables, and any salad that needs a quick citrusy vinaigrette.

Aji-li-mojili is sometimes confused with mojo only because of the applications used.  The word mojo translates to wet or to wet, which is how this sauce is used, whereas Mojo sauce is a complementary sauce for many proteins.

It is no more than a delicious combination of ingredients; fresh garlic, salt, pepper, lemon, spicy peppers, and oil.  The garlic and peppers are either small diced or roughly chopped and pounded in the mortar.  Then, lemon, oil, citrus, salt, and pepper are mixed to create a light vinaigrette.  The sauce is served in small bowls or in a squirt bottle.

Peppers.  If you read my posts and recipes you might notice that I rarely use bell peppers. Neither my husband nor I like them too much, and honestly, we do not miss them.

I'm not particularly eager to use peppers for this recipe either, but I do know I might get called out if I do not, at least, mention them.  After all, the word Aji refers to spicy peppers.

Aji peppers are tiny pepper, which I remember as red little peppers no bigger than an inch.  These peppers are known as Aji Caballeros, or Getleman's pepper.  Our pique or hot sauce is made of these powerful chiles as well.

Another pepper we utilize is the Aji Dulce, or sweet chili pepper.  This one resembles the firey Scotch Bonnet pepper but with a fraction of the heat.  The only issue is, it resembles the Scotch Bonnet so well, that they can easily be mistaken, and you might end up with a product that is hotter than expected.

Garlic.  To me, garlic is king.  So good for you and gives food such great flavor.  Because this dipping sauce is not cooked, you end up with the heat of raw garlic.  I advise you to dice or mince your garlic well before adding it to the sauce; it allows for the garlic's flavor to come through and its natural heat.

Acid.  Lemon is my favorite, but vinegar does a great job in this recipe.  The sauce is used as a dipping accompaniment for roasted pork and fried foods like tostones, fried yuca, or fish.  The acid helps to cut through the fat of the foods that you are dipping into the sauce.  Acid also helps to draw out the flavors of the other ingredients.

I already mentioned lemon, but here are a few others to consider;

Can Aji-li-mojili be used as a marinade

Of course.  The sauce has all the key ingredients for a great marinade, but keep in mind the acid will cook tender flesh like fish. I use aji-li-mojili as a base for my ceviche recipe.  I do not use soy sauce, but I do use lemongrass and ginger for the added punch, and I add cubanelle peppers too.

The main source of the carbs for this recipe is 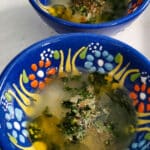